It was a horrible war that claimed as many as ten million lives. 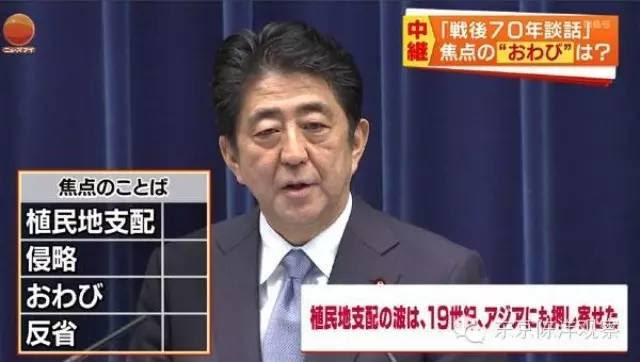 On the 70th anniversary of the end of the war, we must calmly reflect upon the road to war, the path we have taken sinceit ended, and the era of the 20th century. We must learn from the lessons ofhistory the wisdom for our future.

More than one hundred years ago, vastcolonies possessed mainly by the Western powers stretched out across the world.With their overwhelming supremacy in technology, waves of colonial rule surged toward Asia in the 19th century. There is no doubt that the resultant sense of crisis drove forward to achieve modernization.built a constitutional government earlier than any other nation in Asia.The country preserved its independence throughout. The Japan-Russia War gave encouragement to many people under colonial rule from Asia to Africa.

After World War I, which embroiled theworld, the movement for self-determination gained momentum and put brakes oncolonization that had been underway. It was a horrible war that claimed as many as ten million lives. With a strong desire for peace stirred in them, peoplefounded the League of Nations and broughtforth the General Treaty for Renunciation of War. There emerged in theinternational community a new tide of outlawing war itself.

At the beginning,, too,kept steps with other nations. However, with the Great Depression setting inand the Western countries launching economic blocs by involving colonial economies,Japan’s economy suffered a major blow. In such circumstances,’s sense of isolation deepened and it attempted to overcome its diplomatic and economic deadlock through the use of force. Its domestic political system could notserve as a brake to stop such attempts. In this way,Japan lost sight of the overall trends in the world.

With the Manchurian Incident, followed bythe withdrawal from the League of Nations,Japan gradually transformed itself into a challenger to the new international order that the international community sought to establish after tremendous sacrifices.Japan took the wrong course and advanced along the road to war.

On the 70th anniversary of the end of the war, I bow my head deeply before the souls of all those who perished both at home and abroad. I express my feelings of profound grief and my eternal,sincere condolences.

More than three million of our compatriots lost their lives during the war: on the battlefields worrying about the future of their homeland and wishing for the happiness of their families; inremote foreign  countries after the war, in extreme cold or heat, suffering fromstarvation and disease. The atomic bombings of Hiroshimaand Nagasaki, the air raids on Tokyo and other cities, and the ground battles in Okinawa, among others, took a heavy toll among ordinarycitizens without mercy.

Also in countries that fought against,countless lives were lost among young people with promising futures. In, Southeast Asia,the Pacific islands and elsewhere that became the battlefields, numerousinnocent citizens suffered and fell victim to battles as well as hardships suchas severe deprivation of food. We must never forget that there were womenbehind the battlefields whose honour and dignity were severely injured.

Upon the innocent people did our country inflictimmeasurable damage and suffering. History is harsh. What is done cannot beundone. Each and every one of them had his or her life, dream, and belovedfamily. When I squarely contemplate this obvious fact, even now, I find myselfspeechless and my heart is rent with the utmost grief.

The peace we enjoy today exists only uponsuch precious sacrifices. And therein lies the origin of postwar.

We must never again repeat the devastationof war.

Incident, aggression, war — we shall neveragain resort to any form of the threat or use of force as a means of settlinginternational disputes. We shall abandon colonial rule forever and respect theright of self-determination of all peoples throughout the world.

With deep repentance for the war,made thatpledge. Upon it, we have created a free and democratic country, abided by therule of law, and consistently upheld that pledge never to wage a war again.While taking silent pride in the path we have walked as a peace-loving nationfor as long as seventy years, we remain determined never to deviate from thissteadfast course.

hasrepeatedly expressed the feelings of deep remorse and heartfelt apology for itsactions during the war. In order to manifest such feelings through concreteactions, we have engraved in our hearts the histories of suffering of thepeople in Asia as our neighbours: those in Southeast Asian countries such asIndonesia and the Philippines, and Taiwan, the Republic of Korea and China,among others; and we have consistently devoted ourselves to the peace andprosperity of the region since the end of the war.

Such position articulated by the previouscabinets will remain unshakable into the future.

However, no matter what kind of efforts wemay make, the sorrows of those who lost their family members and the painfulmemories of those who underwent immense sufferings by the destruction of warwill never be healed.

Thus, we must take to heart the following.

The fact that more than six millionJapanese repatriates managed to come home safely after the war from variousparts of the Asia-Pacific and became the driving force behind Japan’s postwarreconstruction; the fact that nearly three thousand Japanese children leftbehind in China were able to grow up there and set foot on the soil of theirhomeland again; and the fact that former POWs of the United States, the UnitedKingdom, the Netherlands, Australia and other nations have visited Japan formany years to continue praying for the souls of the war dead on both sides.

How much emotional strugglemust haveexisted and what great efforts must have been necessary for the Chinese peoplewho underwent all the sufferings of the war and for the former POWs whoexperienced unbearable sufferings caused by the Japanese military in order forthem to be so tolerant nevertheless?

That is what we must turn our thoughts toreflect upon.

Thanks to suchmanifestation of tolerance,was ableto return to the international community in the postwar era. Taking thisopportunity of the 70th anniversary of the end of the war,wouldlike to express its heartfelt gratitude to all the nations and all the peoplewho made every effort for reconciliation.

In, the postwar generations nowexceed eighty per cent of its population. We must not let our children,grandchildren, and even further generations to come, who have nothing to dowith that war, be predestined to apologize. Still, even so, we Japanese,across generations, must squarely face the history of the past. We have theresponsibility to inherit the past, in all humbleness, and pass it on to thefuture.

Our parents’ and grandparents’ generationswere able to survive in a devastated land in sheer poverty after the war. Thefuture they brought about is the one our current generation inherited and theone we will hand down to the next generation. Together with the tirelessefforts of our predecessors, this has only been possible through the goodwilland assistance extended to us that transcended hatred by a truly large numberof countries, such as the,, and Europeannations, whichhad fiercely fought against as enemies.

We must pass this down from generation togeneration into the future. We have the great responsibility to take thelessons of history deeply into our hearts, to carve out a better future, and tomake all possible efforts for the peace and prosperity of Asiaand the world.

We will engrave in our hearts the past,whenattempted to break its deadlock with force. Upon this reflection,willcontinue to firmly uphold the principle that any disputes must be settledpeacefully and diplomatically based on the respect for the rule of law and notthrough the use of force, and to reach out to other countries in the world todo the same. As the only country to have ever suffered the devastation ofatomic bombings during war,will fulfil its responsibility in the international community, aiming at thenon-proliferation and ultimate abolition of nuclear weapons.

We will engrave in our hearts the past, whenthe dignity and honour of many women were severely injured during wars in the20th century. Upon this reflection,wishes to be a country alwaysat the side of such women’s injured hearts.will lead the world in makingthe 21st century an era in which women’s human rights are not infringed upon.

We will engrave in our hearts the past,when forming economic blocs made the seeds of conflict thrive. Upon thisreflection,will continue to develop a free, fair and open international economic systemthat will not be influenced by the arbitrary intentions of any nation. We willstrengthen assistance for developing countries, and lead the world towardfurther prosperity. Prosperity is the very foundation for peace.will makeeven greater efforts to fight against poverty, which also serves as a hotbed ofviolence, and to provide opportunities for medical services, education, andself-reliance to all the people in the world.

We will engrave in our hearts the past,whenended up becoming a challenger to the international order. Upon thisreflection,will firmly uphold basic values such as freedom, democracy, and human rights asunyielding values and, by working hand in hand with countries that share suchvalues, hoist the flag of “Proactive Contribution to Peace,” and contribute tothe peace and prosperity of the world more than ever before.

Heading toward the 80th, the 90th and thecentennial anniversary of the end of the war, we are determined to create suchatogether with the Japanese people.