From The Age newspaper of Australia:

In a survey launched this month, the Pew Research Centre finds that most Americans now believe that the US plays a "less important and powerful role" in the world than it did 10 years ago.  The result is hardly a surprise. It doubtless reflects widespread perceptions of foreign policy miscalculation, as well as ongoing weakness in the US economy. Perhaps less well appreciated, however, is that a similar judgment could also be made in assessing the relative importance of the US in global science, technology and innovation.

For more than half a century, the US has been the dominant force in global innovation. For years, its intensity of investment in knowledge – estimated by totting up spending on software, R&D, and higher education as a share of GDP – has been twice that of Europe.  California still spends more on business R&D than Germany does, even though its population is less than half that of Germany's.

And, of course, in the second half of the 20th century, 58 per cent of the world's Nobel Laureates were resident in the US.  By almost any measure of innovation performance American society has long seemed to be the world's most dynamic power. But comparisons drawn with the moribund societies of Europe are no longer something to crow about.  There is now not a single European nation that would be counted among the top 10 US states for their per capita investment in business R&D. And European cities are rapidly dropping down global rankings of regional clusters by international patenting activity in high-technology domains, such as information technology and biotechnology.

Comparisons with Europe, in other words, are much less meaningful today than they were last century, and turning across the Pacific gives a very different perspective of American performance.

There is a zone of nations extending from Japan, China, and South Korea in the north, down to Singapore, Indonesia, Australia, and New Zealand in the south, which might be termed the Western Pacific.

The transformation within this region has been more significant and more broadly based than many in America would realise. Australia, Singapore, South Korea, and Taiwan have all experienced a dramatic expansion in technological and scientific capabilities in the past two decades.

But a significant proportion of the new innovative capacity in the region is attributable to the re-emergence of technological creativity in China.  Today, there are more industrial researchers in China than in Europe.  This year there have been more patent applications made through the patent co-operation treaty involving Chinese inventors than there were involving German inventors.

And there are now three provinces in China where business R&D spending exceeds that of Italy and Spain, not only in absolute terms, but even in per capita terms. These are Jiangsu, Shanghai, and Tianjin.  Perhaps most telling, though, is that along certain dimensions, the Chinese are gaining ground even against American benchmarks.  Within a decade, on the latest projections, there will be greater R&D investment in China than in the US. Chinese authors already publish more scientific papers a year in the fields of physics and chemistry than American authors do.

And Shenzen, in Guangdong province, has just surpassed Silicon Valley as the world's most prolific cluster for international patent applications relating to information and communications technology.

These are not patents filed by subsidiaries of US corporations either. Two Chinese firms based in Shenzen – Huawei and ZTE – have recently joined the top five companies globally across all industry sectors by annual volume of international patent applications.

Of course, not all patents are equally valuable, and different societies have different patenting cultures. But the trajectory is clear.  The balance of the world's inventive and creative power is shifting rapidly. Europe's dynamism is fading. America is still the leader, but it looks vulnerable. And the competitive challenge from East Asia is not just economic or demographic – a consequence of a billion people suddenly entering the global economy. It is also scientific and technological.

Perhaps Americans are thinking, in a world of waning American power, that they will need the help of their oldest allies. But, in the economy of ideas, it is time to recognise that the Europeans are themselves of declining significance.

America is still the most innovative nation the world has ever seen. But if it is to remain so, its citizens must not neglect the mounting importance of the nations on the other side of the Pacific.

Dr Thomas Barlow is a former fellow of Balliol College, Oxford, and a research associate of the US Studies Centre at the University of Sydney. He is the author of Between the Eagle and the Dragon. 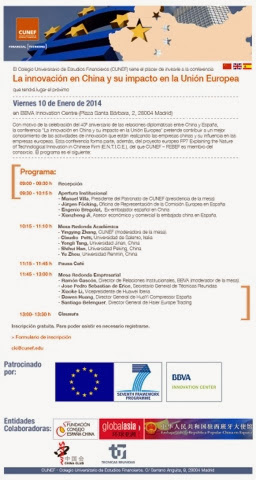 LOEWE opens in Shanghai its largest store globally, outside Spain

Spanish luxury house of Loewe (owned by LVMH) opened last week in Shanghai a new 7,000 sqf store, the largest store of the brand outside its native country. The new Loewe store in Shanghai is located at Jing An Kerry Centre on Nanjing Road West.

In line with Loewe’s current retail concept by Peter Marino, the new store features a 31-foot-high facade rendered in bronze panels with a texture resembling macramé. Interior elements include stucco walls, slabs of Madagascar stone and oak floors. A bamboo sculpture of the brand’s signature Amazona bag by Chinese artist Qing Xuan graces one of the store’s windows.

The boutique also features an Amazona Atelier, where customers can custom-order their own versions of the handbag. Meanwhile, two large interactive screens illustrate the brand’s history and products.